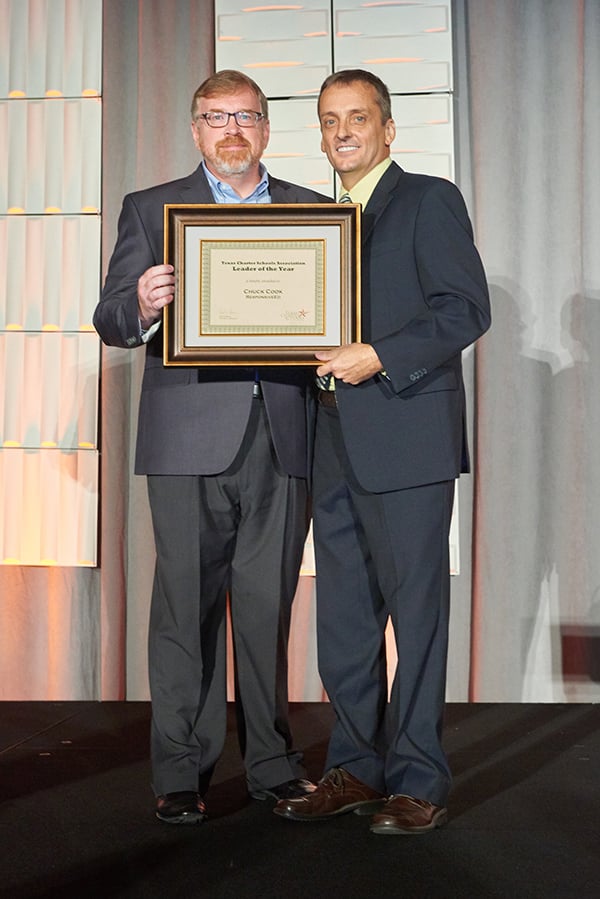 Mr. Cook was chosen for the award based on his service to others and the growth of ResponsiveEd under his leadership.

“Chuck Cook is one of the most innovative charter operators in the state, running a full cadre of charter models at different campuses.  On behalf of TCSA, I offer my sincere congratulations to Mr. Cook for receiving the first TCSA Leader of the Year Award.  He leads by example by putting students first and we thank him for his strong commitment to education,” said David Dunn, Executive Director for TCSA.

This is TCSA’s Leader of the Year program’s inaugural year. Every year it seeks to honor an outstanding Texas charter school leader. As the first recipient, Mr. Cook received a complimentary registration to the conference, a plaque, and a cash award of $1000.

“Public charter schools are all about commitments to children and families to have more quality school options, and those commitments are serious business. Chuck Cook has been making and keeping thousands of those commitments across Texas to children who now are in a better place in school and life. Texas is building a better tomorrow for its children because of the work that ResponsiveEd has been doing and Chuck Cook has been leading,” said Mike Feinberg the co-founder of KIPP charter schools.

Mr. Cook seeks to bring people together to provide hope for students by providing innovative, character-based, personalized learning environments where they can be academically successful and develop into lifelong learners.

He first recognized the necessity of education when he and his wife worked in Los Angeles with impoverished adults living on the streets and developed a literacy program for the homeless that became one of the nation’s largest privately funded systems at that time. This experience shaped his core philosophy to create community based schools educating the individual, not the class, and to promote education designed for the student.

“Chuck understands the dreams that parents have for their children. He never loses touch with those dreams and reminds the thousands serving alongside him that those dreams can be a reality. His integrity is high caliber and his appreciation for the significance of educators is genuine,” said Dr. Alan Wimberley, ResponsiveEd’s Chief Education Architect.

Since it was started in 1999, ResponsiveEd has grown more than 70 campuses across Texas and Arkansas and has served more than 23,000 students from kindergarten through graduation. The company has expanded its school models to include classical, early college, STEM, virtual, and credit recovery schools.